Ask for help, find useful guides, or help others out with their issues.
Post Reply
7 posts • Page 1 of 1

Dear all,
i found Karoo on the web and it looks great to me at the first read, i would like to buy it and replace my mobile phone.

this is what i would like to have also with Karoo, but i am afraid that Karoo does not fit to much the MTBiking.
I need hiking routes and path, altitude, etc

Can you please aware me about Karoo and MTB?

I'm not sure what all of the symbols and colors indicate, but it looks like you've previously had access to an extraordinary amount of map detail. At least out of the box, the Karoo maps, based on the OpenStreetMaps, have much less detail beyond the trails and roads themselves. But I believe that would be true of Garmin cycling GPS devices, too.
Top

There should be no reason why you can't run Oruxmaps directly on Karoo. Someone here might be willing to try that for you?
Top

thank you all for the replies.

Hammerhead on twitter told me that is not out of the box but is possible to load OpenAndroMaps, therefore i asked in the official support but they told me that openandromaps are not supported by the device and is not possible to use them.

@fitmanNJ the colour and signs are explained here

it is a theme for openandromaps.

If, without the support of other apps, Karoo can use openandromaps would be great, maybe it can through apps like OruxMap or LocusMap

Hammerhead will try and encourage you to stick to their official apps, so they're bound to remind you that using other apps is unsupported. But plenty of users have had success running third-party mapping/navigation apps on Karoo, such as Komoot.

So I wouldn't take a lot of notice of what Hammerhead say on this. I'd take a lot more notice of whether anyone else has tried it and got it to work themselves on Karoo.
Top

If someone already tried or want to try will be great.

for mountainbiking Topographic map is mandatory and OpenAndroMaps is really great to follow hiking route or if you need to change the route in the middle of a Wood and you need to check other paths.

MAP STYLES:
Elevate and Elements contain several map styles which can be chosen within the app (how this workds depends on the app). Depending on the map style some captions and symbols are shown sooner, later or not at all. Every map style has a different default selection of overlays which are shown, and for every map style differen options are possible.

Hiking
Key aspect is to have good overview for all features which are relevant for mountain hiking and perceptibility of paths and track, especially their difficulty and character (or if there isn't any information about that). Cycleways which are allowed for pedestrians look similar to footways. As "Hiking" is the basis for the other map style characteristics like the display of landscape features are included in those.

City
This is a light version which is especially useful in cities, for example for sightseeing or for everyday life.
Neither hiking nor cycling routes are shown. The highly emphasized footways and paths of "Hiking" are discreet and difficulty and visibility is not marked. Cycleways which are allowed for pedestrians look similar to footways.
Additionally for better overview at lower zoom landscape and protected area names and colored dots are missing. Therefore this variation is most suitable for finding names of settlements.

A public transport network can be overlayed.

Cycling
As this is a cycling version instead of hiking routes cycling routes are shown strongly. The highly emphasized footways and paths of "Hiking" are slimmer and difficulty and visibility isn't marked. Cycleways are strongly emphasized and surface information is shown if it's in the map data. Ways where cycling isn't allowed are marked with a turquoise cross hatch.

Mountainbike
Based on "Cycling" this map syle shows MTB difficulty levels on tracks and paths, visibility of paths and MTB routes. 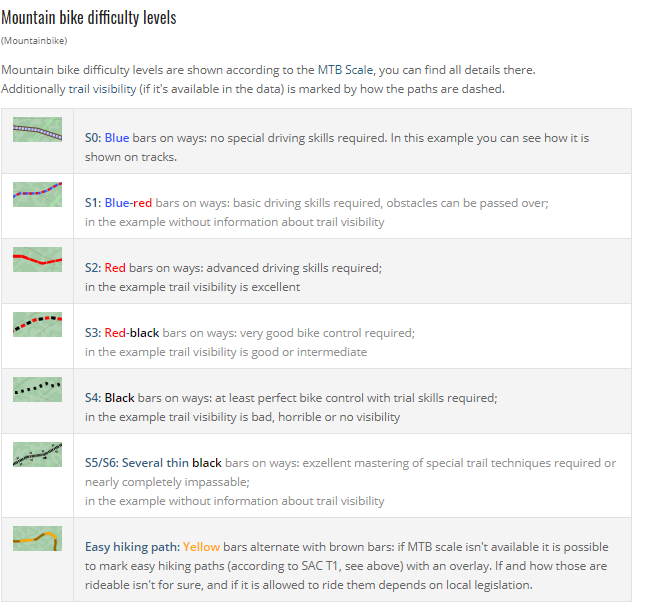 I am using Karoo for mountainbiking.

Here is what I do:

1) Planning my rides: I plan my rides well ahead using a topografic card and then export / import the ride to Karoo. I find this easier than plan on a small device as Karoo or my phone. To follow the track, the standard map on Karoo is enough for me.

2) Just in case that the planned tour is not ridable (bridge missing, tracks washed away, etc). I take a topo grafic card with me to plan possible de-tours. For this purpose I added Komoot on my device. If you have internet available it's also possible to use your mobile phone and import the detour using the karoo dashboard. Or of course you take one of those good old fashioned paper maps.