Can Garmin Survive After Smartphones Nearly Killed GPS?
https://youtu.be/Tp7tYrF7HeI
This is a CNBC video on Garmin, but has some insights into the market in general. ~20 min long
Bike head units have a similar trajectory in development and if we look at feature roadmaps in car units
the spill over is conspicuous.

Good vid, not in dpth but in breadth of the discussion
Top

GPLama did a nice review of the Garmin November Software Update. The competition is definitely getting to them.
So where are they going ?
Pushing Connect IQ, indoor training, Set Up and Live Track
Driving features from 1030 down the line.

Garmin has massive stockpiles of cash and significant market share. They sell vast numbers of watches and bike units compared to the competition. they are not going anywhere bad for quite some time yet.

the link you gave https://youtu.be/Tp7tYrF7HeI just touches on some issues and I don't know quite what it is trying to say and wasted 5 minutes of my life skimming through it.

could Hammerhead be a future player?

one key to success is apps/applets. only Garmin really has these right now though CIQ.
I can't see any other way to compete on features than apps and I can only see a smartphone-based solution being able to do that on a large scale through android.
Top

I think the YT helped explore the industry wide issues that both face. I read the Garmin stock investor reviews at Morningside and their SEC stuff which , while dense and "corporatese"at times , discusses how their bountiful core business in consumer GPS unraveled, and how they are focusing on "Sports/Fitness". They are huge and even if hamstrung, not dumb, and have the same targets as Hammerhead and Wahoo.
Garmin and Wahoo further have other lines to offset development costs, but also in very competitive areas ( watches, trainers, sensors)

There are ˜14 different bike computer "markets" based on users and their needs.
HH's focus on Android gives it a lead, but it really hasn't seized the advantage solidly,
as evidenced by the lack of capitalizing on an app store and sideloading. Not to mention the Tucker style "roll outs" of the K1 and K2.
https://www.roadandtrack.com/car-cultur ... ash-story/

Garmin and Wahoo have all the same technical problems with stability ,connectivity, power management, managing updates and bug fixes, but lots of mass/momentum.
It feels like a race over cobblestones wearing 4"stiletto heels. Lots of stumbling. Ankles will fail. Or the PC market in 1986.
No Apple has yet emerged, and we know how vulnerable IBM was.
Last edited by bikebikebike on Wed Feb 03, 2021 5:02 pm, edited 1 time in total.
Top 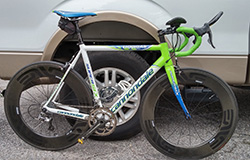 CIQ 4.0 is going to be a big update. I've started developing a CIQ app for my company and the platform is...terrible. I mean just really bad. It's poorly documented, the documentation doesn't even have a search feature, the platform's XML has like 5 tags total supported, so it's very simple. They have their own language, because reasons I guess? None of it feels modern.

But they are doing smart things with the platform. Firstly, they're replacing Eclipse with VS Code. If you're not a developer, you might not appreciate that, but got dang is that nice. I didn't even bother to download Eclipse when I set up my environment, VS Code is a great developer environment, Eclipse is...not.

CIQ 4 will, for a developer, really take things closer to a first class smart watch platform. That said, it kind of looks like no current devices will actually support it. That could mean a pretty big change to upcoming devices, and it will be interesting to see exactly what those changes are. It might be that you just need more processing power and RAM for the new features, but the UX is going to be different. They are eliminating the widget/app paradigm, and replacing everything with apps that can be launched at any time (including during activities). They are also going to change the way that graphics memory works to make it a lot easier to handle graphical resources on different devices (graphics on an OLED take up a lot more memory than they do on the MIP displays). Some fancier draw tools are going to be in there, too allowing for transparencies and gradients (though some of that stuff is already available on Edge devices, just not watches).

It's really going to be a pretty drastic overhaul - both from a user perspective and a dev perspective. But you're going to have to buy a new watch/bike computer to get the new features.
Top

There is a need for a stable PAN ( Personal Area Network) for bikes. HH is competitive in the race, Garmin the 800 pound gorilla.
Garmin is plagued by the need for legacy support and drags a huge liability in that.
HH is newer and fresher.
Or has been....
I think that there is concern over the pattern in startups where your exit is selling to a giant, rather than creation of an ongoing product line.
HH has always had that as a lurking suspicion , and the "angel" supporter's goals hasve never been really made clear.
Are they looking for a Dev and flip, the pump and dump equivalent of developing and then selling your product/team to a bigger player?
The Android base makes that an interesting possibility.
Garmin clearly needs to revise its legacy core, and they have fertilized the market to expect rapid planned obsolescence/turnover/updating in their product line, and acceptance of a proprietary OS.
Big upset can come if someone consolidated the software platform to something more open sourced.
Apple and MS and Linux and Android have seen this.

Again , a phone that used ANT+ well and there could be a big shift.
Garmin had a phone planned that got torpedoed by the iPhone grabbing the market, the 2009 Garmin-Asus Nüvifone.

They had several models and ran Windows Mobile 6.1, Android and propietary Linux.
In 2010, Garmin announced it would stop making nüvifones altogether due to poor sales.
Last edited by bikebikebike on Wed Feb 03, 2021 10:37 pm, edited 3 times in total.
Top

bikebikebike wrote: ↑Wed Feb 03, 2021 5:19 pm There is a need for a stable PAN for bikes. HH is competitive in the race, Garmin the 800 pound gorilla.
Garmin is plagued by the need for legacy support and drags a huge liability in that.
HH is newer and fresher.
Or has been....
I think that there is concern over the pattern in startups where your exit is selling to a giant...

I'll admit, I am not sure what a PAN is. But to be fair, there are and have been several viable alternatives to Garmin for bike computers other than Hammerhead. Sigma, Cateye, Lezyne, Pioneer, Stages, Bryton, and most importantly I think, Wahoo. You have, over time, seen Garmin backporting more features to older Edge units (Look at the 1030, it got all of the features from the 530/830 launch, they all got features from the 1030 plus launch). I don't think they're doing that for any reason other than seeing their market get eaten by competitors. Wahoo shook up the market, IMHO because they started to backport all their new features to their entire product line (something that HH is thus far doing, too). That forced Garmin's hand a bit.

As someone that owned a Fenix 5 Plus, I know something about getting abandoned by Garmin, with mid-tier devices, not even premium ones, getting new features that I never got. And we're talking about devices that were mid-tier and launched just a few months after the Fenix 5 Plus line. I roll my eyes at Fenix 3 owners that want current Fenix features, but come on, the 245 got a bunch of features that the 5 Plus could have gotten but didn't. But to me, that market looked more like the bike computer market pre-Wahoo until maybe a year ago. Suunto and Polar never did a great job disrupting it. With Coros around, and now (thank the lord) Wahoo finally got around to entering the market, you might see Garmin backporting new features. Guess what happened in December? Bunch of new features to the Fenix 6 line in a firmware update.

Unless new features legitimately can't be backported, as it appears might be the case with CIQ 4. The preview came right from Garmin, so it might be overly rosy, but it really looks like it's going to be a very different platform when that launches, presumably this year.
Top

Personal Area Network . Sorry .
Single stable coordinated use of central system.
Think of the Apple universe at its best, and what cars have moved towards.
Opposite of multiple single use devices that do not talk to each other.
Look at how Apple devices put a MFi ID code in cables and wont accept non certified cables
and the Varia light implementation of the ANT+ "standard" adds an ID code that often wont work with its own devices, as well as other brands.
They have created a big issue by announcing compatibility without specifying what that means, specifically.
That confuses the users and creates frustration.
HH support keeps accepting requests for implementation of features that Garmin firewalls with proprietary acts in the Varia system, for example.
That may be due to the fact the Varia was a purchased system, not developed inhouse.

I included the mention of the Garmin phone to show how they are capable of getting it and not averse to using other OS,
and strangely haven't partnered with someone who could otherwise leave them in the world of the extinct OS's of the '80s.
Top

The Bosch Cobi.Bike looks like the PAN for ebikes using a cellphone as CPU with Android and iPhone integration.
I am just now diving in, but it looks intriguing, and the type of system that could pull a lot of things together.
Working well is another matter. Hmmm
This kind of thing continues making Hammerhead a purchase target, as occurred with COBI Gbmh and Garmin, a vulnerable rival.

In 2014, COBI.Bike GmbH was founded as a start-up in Frankfurt by Andreas Gahlert, Carsten Lindstedt, Heiko Schweickhardt and Tom Acland. Since its acquisition by Bosch eBike Systems in November 2017, the company has been a 100% subsidiary of Robert Bosch GmbH. The company promotes the networking of people, services and products on bikes or eBikes.

About the COBI.bike Product Quote:
The smart biking system COBI.Bike stands for connected biking and connects smartphones, apps and sensors to bikes and eBikes. It consists of the COBI.Bike hub, the thumb controller and the app. COBI.Bike ensures that you remain connected to the digital world even while on the bike. The thumb controller and the COBI.Bike app control the safe and convenient access to bike navigation, fitness data, telephone or music while cycling and users are connected to other apps such as komoot or Strava if they wish. Additional hub features such as a charging function for smartphones, an automatic AmbiSense light system and an alarm system provide even more comfort, safety and fun on every ride.

The COBI.Bike system was designed for all bikes and works with virtually every smartphone."

3/12/21 ED: It looks like either Bosch doesn't know what to do with their acquisition, or they are in over their head. Maybe both. COBI has activity, but no real product, though Bosch keeps mentioning/feeding it, and acts as if it is their GCIQ.
Not an unusual trajectory.
HH could be looking at the same, and they aren't saying otherwise, or much else.
How much synergy would there be between the automotive systems like Apple's car integration and what COBI tried?
A NorthPole ANT+ bridge and iphone/Android app? How long did it take/is it taking for car systems to de-fragment?
Bike systems are different, but not more complex in their needs.
The phones already do Zwift.
Top

Still a very competitive arena, and issues above hold as competitors see the potential.
Top
Post Reply
10 posts • Page 1 of 1